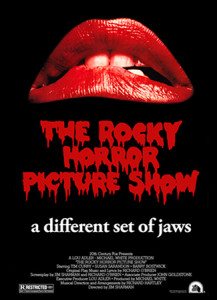 Rice: At the beginning of the film is the wedding of Ralph Hapschatt and Betty Munroe. As the newlyweds exit the church, you should throw the rice along with the on-screen wedding guests.

Newspapers: When Brad and Janet are caught in the storm, Janet covers her head with a newspaper The “Plain Dealer”. At this point, you should likewise cover your head.

Flashlights: During the “There’s a light” verse of “Over at the Frankenstein Place, “you should light up the theater with phones and flashlights. (Be careful to respect the theater’s policy about open flames – remember you are wearing newspapers on your head!)

Rubber gloves: During and after the creation speech, Frank snaps his rubber gloves three times. Later, Magenta pulls these gloves off his hands. You should snap your gloves in sync each time to create a fantastic sound.

Noisemakers: At the end of the creation speech, the Transylvanians respond with applause and noisemakers. You should do the same.

Confetti: At the end of the “Charles Atlas Song” reprise, the Transylvanians throw confetti as Rocky and Frank head toward the bedroom. You should do the same

Toilet paper: When Dr. Scott enters the lab, Brad cries out “Great Scott!” At this point, you should hurl rolls of toilet paper into the air (preferably Scotts).

Toast: When Frank proposes a toast at dinner, members of the audience throw toast into the air (preferably unbuttered… things could get sticky).

Party hat: At the dinner table, when Frank puts on a party hat, you should do the same

Bell: During the song “Planet Schmanet Janet,” ring the bell when Frank sings “Did you hear a bell ring?”

Cards: During the song “I’m Going Home,” Frank sings “Cards for sorrow, cards for pain”. At this point you should shower the theater with cards.

Water pistols: These are used by members of the audience to simulate the rainstorm that Brad and Janet are caught in. (Now do you see why you should use the newspapers?)

Hot dogs and prunes: It has happened on occasion, that fans will throw hot dogs and prunes at their appropriate mention in the film. This should not be encouraged because it attracts rodents and leaves stains on the screen

PLEASE NO THROWING ANYTHING TOWARDS THE SCREEN.

MANAGEMENT RESERVES THE RIGHT TO STOP THE FILM AT ANYTIME

The 2021 Schedule will be announce soon!

Holidays at The Aurora Theatre are a very special time. From the day after Thanksgiving to New Year’s Day, the Aurora Theatre brings families and friends together to enjoy free classic holiday films and a one of a kind display of original props, costumes and more from the movie “How the Grinch Stole Christmas” (2000). 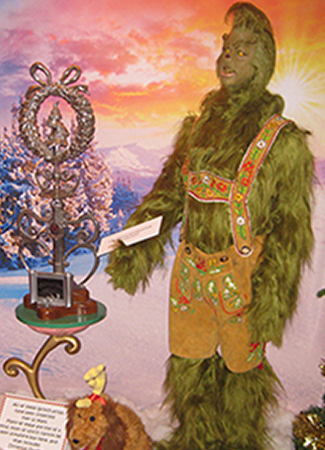 The Aurora Theatre is proud to support independent and aspiring film maker both locally and beyond. We have played host numerous screening including “The Great Chicken Wing Hunt,” “The American Made Movie” and more. We are also supporters of the East Aurora Film Academy and play host to their annual film festival.